Reflecting on my five-year anniversary of yoga classes coming up the end of next month, I noticed last week I attained a major milestone which, after five years of faithful class attendance and constant effort, I had not yet been able to attain.  Yes, that’s right.  After five full years of rarely ever missing a weekly class, last week, for the first time ever, I was able to, wait for it…. injure myself.  We were in Warrior One,  right foot forward, left foot back, leaning forward from the waist, and doing a hip opener on the left side,  Apparently I have finally accomplished the flexibility, strength and ability to breath through pain enough to pull/strain my back muscle on the lower left side.  (this is not exactly it, but will give you a general idea….)

I had been kinda hoping for a milestone like a head stand, or a graceful shoulder stand,  but hey, a milestone is a milestone.
They asked me in class the other day if I had any observations after five years of practice. I said I had no idea why the Bush administration risked such a public outcry over waterboarding terrorism suspects when there are thousands of yoga instructors in this country.  Wow, even after five years, at the end of 90 minutes, if they threatened to go on for another thirty, I’d give them my social security number, my bank account number and my ATM Card.  Another hour, I’d sell out my mother.  They could have taken those guys and put them with the right yoga teacher for 6 hours in pigeon or chair pose and they would have had Bin Laden’s address in 2002.  I suppose many yoga instructors would have a philosophical objection to “forcing” people to perform yoga poses to get information out of them but I’m sure the whole saving lives thing would get some past the moral dilemma.
As my five-year anniversary approaches, I had been thinking that with the material available to me after only 6 Zumba classes, that there was an unlimited well in five years of yoga classes.  For example, in part II,  how yoga has greatly improved my internal profanity.  See for example…pigeon.
“We all live in aYellow Submarine” 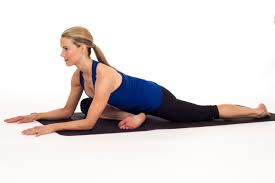